The History of The Tannery and Building 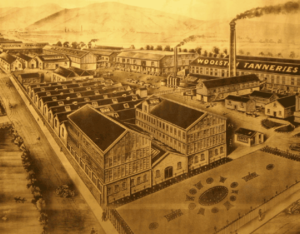 The Woolston Tanneries was a prominent industry in Woolston for approximately 80 years. The tanneries were situated on a roughly triangular piece of land bounded by Garlands Road, Maunsell Street, Tanner Street and Cumnor Terrace, originally part of Rural Section 91, conveyed by the Canterbury Association to Henry Selfe Selfe. With the Heathcote River to the East and the Christchurch Lyttelton railway line running close to its southern boundary, it was an ideal site for industry. The Heathcote River was an important food source for Maori and was also an important transportation route. With European settlement the Heathcote River and Ferry Road became the main entry point for people arriving in Canterbury. Industries were soon established along the river because of the availability of water and because it was a convenient sewer. When the river lost its importance as a transportation route in the 1870s, Woolston remained an important industrial area because the railway connection between Christchurch and the port at Lyttelton passed through the area.

The growth of the tanneries industry is evident when comparing the number of those operating over a ten year period. In 1873 there were seven wool scours and five tanneries situated on the lower Heathcote; this increased to 11 wool scours and 11 tanneries by 1883. Because there were several tanneries in Woolston in the 1870s it is not easy to confirm which one became the predominant ‘Woolston Tanneries’ referred to in the later years. However, it is likely to be the large complex built in 1881 by Lightband, Allan and Co and noted in the Lyttelton Times. At this time there were seven or eight fellmongeries (where skin was prepared for leather-making), a tannery and a flax works (for paper making) all operating in the same area. 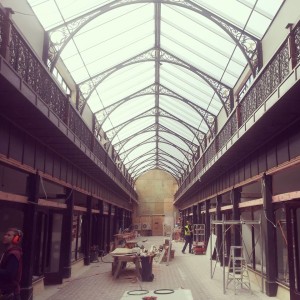 A reporter who visited the tannery in 1891 said its tall buildings and extensive yards formed a conspicuous landmark; it was situated on five acres on the west bank of the Heathcote River, with one and a half acres being taken by buildings and pits. The Tannery was an important business because it utilised one of Canterbury’s chief natural products while employing a significant number of workers. During the 1890s for example, 50 men were employed on a regular basis, 46 of whom lived in Woolston. In 1916 the Woolston Tanneries were processing a million sheep-pelts a year, converting over 1,000 hides per week into leather and employing about 200 people. There have been several fires at the tanneries site, and in 1924 alone were three fires the broke out in January, April and August. The April fire occurred soon after buildings had been rebuilt, following January’s fire. The August fire destroyed most of the buildings on the site and it was reported that only the glove factory and the hides department had not been seriously damaged in any of the three fires that year.

Industries began closing or moving out of the area in the 1950s, though fifty years later a reverse trend began to occur with new industries developing on vacant land.

The tannery closed in 1959 after the company went into receivership and the land was progressively sold off. In 1961 the manufacturing of baths, tubs, laundry products and a soap powder manufacturing business were located in the old tannery buildings. In the 1970s the oldest buildings on the site were demolished. By this time other small factories of concrete block and iron girders had been erected.

Since 1994 most of the site has been owned by Alisdair Cassels who began restoring some of the old tannery buildings and leasing them to businesses, while also developing the vacant land. This means that the site contains a mix of buildings, old and new.

At the Garlands Road end of the site is Woolston Mews, a multi-unit complex of 12 apartments/warehouses/ office units, which Cassels started building in 2000 and developed in stages. Most were sold to owner/occupiers and housed several small businesses. Following the success of Woolston Mews, Cassels proceeded to develop the Maunsell Road end of the property by building Woolston Close – a nine-unit complex with apartments above and work-space below. In 2005 ninety per cent of the old industrial buildings on the site were leased to a variety of businesses.

The cultural significance of the Woolston Tannery site arises from its role as an important employer of the local population, a manufacturer for the local market (including for local shoe and boot manufacturing businesses) and a significant export earner. Like many of Canterbury’s early industries it involved the processing of an agricultural product. At its peak, Woolston Tanneries Ltd is believed to have employed a workforce of over 1,500. 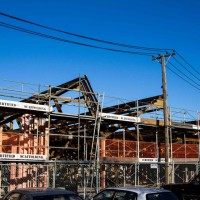 The remaining Woolston Tanneries buildings are significant architecturally because they represent an industry which was once very common in the Woolston area, but is now largely forgotten. They are also a distinctive landmark in the area. Most of the buildings are constructed of brick with timber door and window frames and corrugated iron or asbestos roofs. Some have corrugated iron walls. While the oldest of the buildings on the site were demolished in the 1970s, two lines of buildings are extant and are situated more or less along the two long sides of the triangular shaped site. The buildings are similar in structure and materials; they are one storey high and have an average ridge height of 5.5m. A report prepared by Athfield Architects Ltd in 2008 said that all the structures had been modified. Further research may reveal the age of the buildings that remain and whether or not they pre-date the fires of 1924. Some reports date the buildings back to the 1880s or 1890s.

There is a perspective drawing of the site – this drawing appears to pre-date the fire. The buildings appear on this drawing.

The remaining buildings exhibit a standard degree of technology and craftsmanship for industrial buildings built of brick, corrugated iron and asbestos, of their period. However there is also the possibility that the buildings and site may contain relics of the tanning industry which feature evidence of past technology or craftsmanship.

An description of the early tanneries complex noted that the floor space of the buildings at the Woolston Tanneries covered two and three quarter acres, while the total area of the works covered seven acres. Rail sidings brought raw hides, tanning materials, and coal for heating into the site. The tannery had its own reservoirs supplying 80,000 gallons of water per day, and a treatment plant to purify the effluent before it was released. The tanneries’ garden of two and a half acres, which were planted in twelve to fifteen thousand annuals each year, was also an outstanding feature. 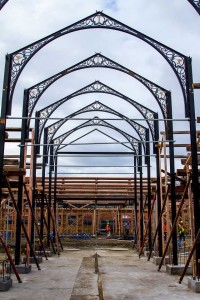 The contextual significance of the tanneries site, arises from its location next to the Heathcote River and the railway line in Woolston’s industrial area. While the use of the river for transportation would have been declining by the time the tannery was built, the river would still have been important for the disposal of effluent and possibly as a water source.

The railway as a means of transportation, with a siding into the tanneries site, would have been extremely important throughout the years of the tanneries’ operation. The tannery buildings are a prominent landmark with a distinctive saw-tooth roof-line along Cumnor Terrace (and also on Tanner Street) which has been repeated in other more modern buildings both on the site and on nearby sites. The shape and form of the tannery buildings make a significant contribution to the character of the area and streetscape.