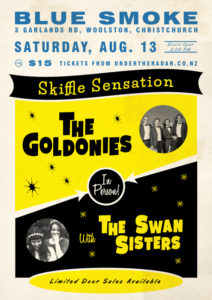 The Swan Sisters and The Goldonies join forces for one night only in Christchurch!

The evening will start off with sweet, soulful tunes by award winning songstress Amiria Grenell and her dear friend and collaborator, Amy Grace. Theirs is a delicate blend of music styles: alt. folk with beautiful harmonies, a touch of country, a bit of dreamy pop and a dash of swingin’ blues. It encapsulates their friendship and love of storytelling. The Swan Sisters debut EP, Rivers, will be available for purchase on the night.

It’ll then be time to whip out your dancing shoes and relish in a captivating rock and roll set by New Zealand’s premier skiffle band, The Goldonies!

The Goldonies were originally formed to be the house band during The Court Theatre’s 2014 summer production of One Man, Two Guvnors.
The band is comprised of Chris Wethey (bass/vocals) Tim Sellars (washboard/vocals) Cameron Douglas (vocals/guitar) and Ben Eldridge (lead guitar/vocals). Tim, Chris and Ben are all graduates of the Christchurch jazz school and are individually active on the local and national music scene across a wide variety of genres. Cameron is a well-established actor who has appeared in numerous productions at The Court and in theatres around the country. He is also an accomplished singer who has performed with the CSO as well as in musical productions such as Grease and Mary Poppins.

The Goldonies have been winning over audiences with their mix of rock ‘n’ roll classics performed with high energy and humor in the skiffle band setting, and they have already been booked to play shows in a variety of different venues including three stints on Australian cruise ships, the 2015 Christchurch Nostalgia festival, as well as weddings and bar rave ups. A typical set list will usually find the boys tipping their hats to the three B’s of rock ‘n’ roll – Buddy, Berry and Beatles, as well as numerous other classics from the 1950’s and 60’s.